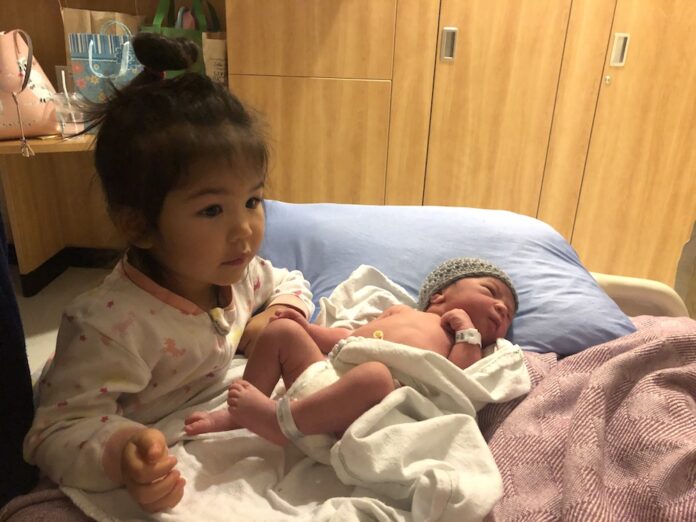 The initial movements that newborn babies make are primitive reflexes and part of normal neurological development.  Some of these movements may surprise new parents if they have never been around a newborn baby before.

Reflexes are involuntary, which means they happen without trying.  This is similar to when a doctor taps your knee with a hammer and your leg jerks.  Newborn reflexes come from the brainstem or spinal cord.  Most often they are present at birth and disappear within weeks or months.

Doctors will assess for these reflexes during newborn well-baby checks as a normal part of a neurological exam. What they are looking for includes:

This reflex is present at birth and disappears by 6 months of age.   It can be a very dramatic reflex in some infants and alarming to new parents.

The Moro reflex occurs when your baby’s head drops position in relation to their body.  It can also occur if there are sudden abrupt loud noises.  An example of this occurring is when you are placing your baby into a crib or bassinet on their back and their head drops below the level of their body.  The baby “startles” by extending their arms up and out with their hands open, then quickly bringing their arms together like they would hug something.  Some babies give a loud cry when this happens.

This response should be equal on both sides of the body.

A newborn infant can have a remarkably tight grip at birth thanks to the palmar grasp reflex.  This reflex disappears by around 2 months of age when your baby starts grasping things voluntarily instead of reflexively.

A palmar grasp can be induced by stroking your baby’s palm with your finger and your baby quickly and tightly grabs on.  Remember this is a reflex only and they don’t have control over their grasp until at least 2 months of age.

This reflex occurs when your baby is lying flat on their back.  When their head turns to one side, the arm on that side will straighten and the opposite arm will bend.  This gives the impression that your baby is in a “fencing posture”.  It is a subtle reflex, and you may not see it if your baby is crying or not at rest.  It is most prominent around 1 month of age and disappears by 5-7 months.

This reflex should be equally present on both sides of the body.

Placing and Stepping or “Walking”

If you hold your newborn baby under the arms while supporting their head and let their feet touch a flat surface, they will begin to put one foot in front of the other as though they are “walking”.

It is present at birth and disappears around 2 months of age.

If you notice that your baby doesn’t have symmetrical reflexes or these reflexes are absent, you should contact your doctor for an assessment.